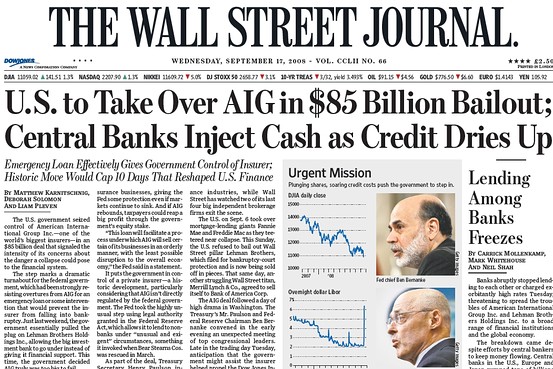 Quantitative Research: The US financial crisis of 2007-08 is considered as the most unique and severe crisis after the Great Depression of 1930’s. This is due to the fact that the causes and triggers of such financial crisis disproved many beliefs of different stakeholders. The greatest disbelief was that housing prices are not affected by demand supply conditions and can only go up, along with the disbelief that modern economy can also rely solely on the propositions of “Invisible Hand”.

The US financial crisis of 2007-08 is considered as the most unique and severe crisis after the Great Depression of 1930’s.

This is due to the fact that the causes and triggers of such financial crisis disproved many beliefs of different stakeholders.

The greatest disbelief was that housing prices are not affected by demand supply conditions and can only go up, along with the disbelief that modern economy can also rely solely on the propositions of “Invisible Hand”.

Consequences of the US Financial Crisis

Effects on GDP of Global Economies 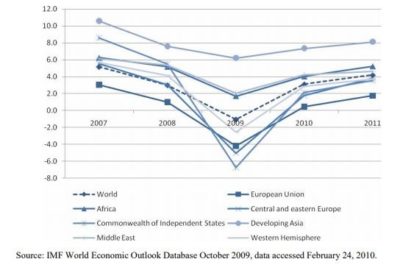 The adverse effects of the US financial crisis of 2007-08 were not restricted only to the United States economy, which was primarily due to the size of U.S economy and its interconnections with different economies around the globe, however such effects on global economies varied in its extent.

In this regard the following line chart depicts that the impacts were most severe in developed countries, specifically in European Union, Central and Eastern Europe and Commonwealth of Independent States.

This was mainly due to the fact that not only different individual and institutional investors invested in complex securities developed on Wall Street but also the activities of different financial institutions were integrated.

On the other hand the least impact was faced by developing Asian countries, primarily due to their lag in financial investment innovations and non-synchronization of activities with developed countries. 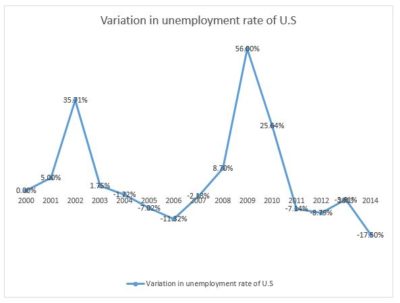 increased unemployment levels, which is apparent from the fact that the un-employment rate in U.S reached 9.633% in 2010, which was almost double the pre-crisis rate.

Such unemployment was also contributed by the closure of different large corporations such as Lehman Brothers and Bear Stearns.

As in the variation in the effect of financial crisis on global economies, unemployment levels also varied by the labor force attributes such as age, skill level, education and country of origin.

In this regard it was observed that mostly young un-skilled labors were laid off, due to the consideration by employers of additional cost of rehiring after the financial crisis.

Further when faced with a decision of firing one of the two labors possessing similar attributes, temporary or migrant labors were given preference for being laid off.

From the trend graph it can be assessed that variation in US unemployment rate, as compared to their prior period, was the highest during the period 2008-10. 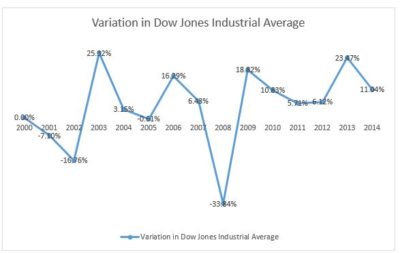 The decline in Dow Jones Industrial Average initiated from the year 2007 as rumours regarding the potential insolvency of some of the major US and global companies.

such as AIG, GE and entire US financial system began to circulate.

From the trend graph it can be assessed that as a result US Dow Jones Index declined by around 33% during the year 2008, as the confidence of consumers in US financial markets was tarnished and panic settled in.

Comparative Analysis of Causes and Consequences of Financial Crisis 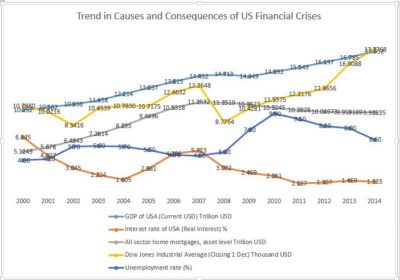 From the line graph it can be deduced that all the selected variables are correlated, either directly or inversely, depicting that the causes and the consequences are interlinked with each other.

From such chart it can be observed that the consequences of US financial crisis of 2007-08 for which proxies of unemployment rate, Dow Jones Industrial Average and GDP can be used, move along with the rate of interest and home mortgage loan levels, which are used as a proxy to represent causes of crisis.

However the extent of curve represents that the financial crisis was caused more by the increasing level of housing mortgage loans as compared to other factors.

Therefore keeping such specific relationship of housing mortgage loan with the economic downturn, the crisis is accurately referred to as the housing crisis which was triggered mainly by the bursting of housing bubble.

The degree of such relationship has also been studied in great detail on the basis of different econometric techniques in Research Paper: Causes of the Financial Crisis of 2007-08

Managing the adverse impacts of the US financial crisis of 2007-08 proved to be a very arduous task not only for the government but also for the financial institutions and other involved stakeholders.

This was primarily due to the fact that the economy of United States run mostly on credit, but for this to function the lenders or financial institutions should have the funds to finance the activities of household consumers.

Further in order to operate effectively the banks should also maintain a particular leverage position for maintaining not only its continuous liquidity position but also its creditworthiness.

There were many other problems which needed dealing, such as the rising rate of unemployment and the increasing rate of housing foreclosure.

Initially the government was confident that sooner or later the invisible hand would come into play and the market would reach equilibrium, but soon it was realized that the government intervention was essential.

At that time the Federal treasury and institutional affairs were overseen mainly by Henry Paulson, Ben Bernanke and Alan Greenspan who had a strict policy of non-interference in matters of private sector.

Due to such policy Lehman Brothers, which was the fourth largest investment bank in U.S filed for bankruptcy after facing severe crisis.

However when the matters got out of hand, the government representatives had to, against their policy interfere to manage the entire U.S financial system which was crumbling down.

Initially in order to mitigate the adverse impacts of the US financial crisis of 2007-08 in the short run the government made a policy of financial restructuring where different financial institutions merged keeping in view certain considerations such as the availability of funds and their leverage position.

Further in order to maintain the flow of credit the government injected $700 billion as bailout package to buy mortgage-backed securities that were in danger of defaulting.

However in order to minimize the chances of occurrence of any similar events in the future numerous regulatory laws were also promulgated some of which include Dodd-Frank Wall Street Reform, Consumer Protection Act, Economic Stabilization Act, under which Troubled Asset Relief Program was introduced; and the Homeless Emergency Assistance and Rapid Transition to Housing Act (HEARTH).